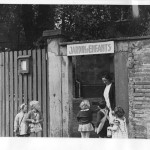 The “Kindergarten” was established on September 23, 1946 by Pastor Rosenstiehl to allow war widows to work while being reassured that their children were safe and well guarded.
The organisation was registered in the court of Schiltigheim under the name “Organisation for the encouragement of child protection” and met an immediate need. Its early stages were very difficult as its founder and its staff were richer in faith and courage than money! 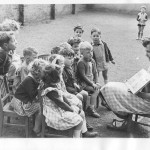 It all began with the help and goodwill of the people. Pastor Rosenstiehl, his wife who was the 1st Director of the Kindergarten, the pharmacist Bloch, Rabbi Friedman, the priest Seemann, Ms. Stahl, and the ladies of the parish organisation devoted themselves with unparalleled enthusiasm in this social work.
During the first year, the children remained in Kindergarten all day. Lunch was served thanks to U.S. grants and donations from “Kleingartner” (= workers’ gardens).

The Kindergarten got the approval of the DDASS for a small workforce, since the premises were not so big. The Kindergarten was then set in a small room in the old barn of the house of the Sisters. 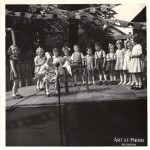 After a few years of operation, and growing needs, a new construction was planned. It was done in three stages. The old barn of the house of the Sisters was demolished by a team of the parish youth. The Organisation of Protestant ladies, owners of the land, obtained the necessary subsidies for the construction of the first room to replace the barn, then a second small adjacent room and finally another storey was added. 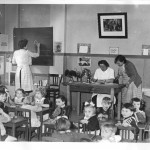 October 3, 1954: official inauguration of the Kindergarten with the prefect of the Bas-Rhin at that time: Paul Demange, and all local personalities.

The Kindergarten grew thanks to the settling of a 45-square-metre multipurpose hall for the practice of additional activities (gymnastics, music…).
It got the approval to host 80 children.

Approval of the PMI to host 75 children.

You can find us in Bischheim (Alsace) 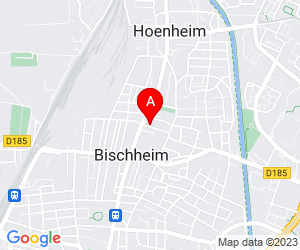